I was raised to be skeptical. And it’s no wonder really, with the family I’m from. Being a Jewish member of the intelligentsia in the Soviet Union surely came with a good measure of skepticism, not to say anxiety, about your environment and the people in your life. I know it was a culture of intense social criticism – you couldn’t just do whatever you damn well wanted; there were tons of official and unwritten rules.

So they were careful, skeptical, cautious, always at least slightly defensive- my family that is. Or at least that’s how I imagine it was, since that’s not really the kind of stuff we talk about.

So it’s not surprising that I always question everything. Really, everything. All social norms, all societal structures and all forms of authority – I have to pick apart. That means I’ve developed the habit of using my intellect for the processing of any and all kinds of information. It also means, that I’m always full of doubt about anything that isn’t totally crystal clear to me. So this time, I’ll be diving deeply into doubt, because I want to know – is it really as good for me as my mind tells me it is?

On one hand, some kind of consensus about reality is surely healthy for our society, as we can see from the current political environment and the rise to prominence of the “alternative-facts” notion. I’ve been feeling dismayed at the ease with which people accept and cover up absolutely blatant lies. Not because I think anything particularly new is happening in the world, but because this absolute loss of decorum is a bit much for my taste. But there’s no real point to discussing politics (except as a fun pass-time with friends). I hold one political view, and it is encapsulated brilliantly in one utterance made by Frank Zappa:

“Politics is the entertainment division of the military-industrial complex.”

I do think facts are important, and that searching for the truth is highly valuable. Science is the only viable way for objectively describing the truth, and I have a very high regard for the scientific method. As to bad science, the cure for that is of course – good science. I don’t believe there’s such a thing as “alternative facts”, outside of being a wonderful demagogic device for the authoritarian nut-jobs du jour.

Having clarified that, let us proceed down the rabbit hole. The trouble with a complete reliance on the intellect as the filter for analyzing reality and reaching conclusions about reality, is that the human intellect was not designed to capture reality properly. Evolution designed the intellect to serve us for the needs of survival. Better to assume that that rope is a snake and be wrong than to go grabbing willy-nilly and get bitten. And so, we have developed to function in a “better safe than sorry” mode. We perceive exactly the information we need for that, not more and not less. Our senses, including our intellect, do not provide us with an accurate representation of the world, but rather we are provided with the information we need for survival and reproduction. Here are some examples I like:

In addition to our senses not being highly trustworthy, there is also an undeniable element of life which we can variously call luck, chaos, synchronicity or coincidence. When you thought about someone after not thinking of them at all for years and suddenly you see them somewhere, that’s one of those moments. When the weather and your mood align and you just know it’s an auspicious day, and good things keep happening that day, that’s one of those.

Actually, even if all those experiences are completely psychosomatic, so what? A life that’s all logic and sense perception (‘I’ll believe it if I see it!’) is really a very grey and drab one, and in the times I live that way, I know it makes everything seem grey, pointless and mundane.

“Intellectual understanding is a source of obstructions which prevents one from entering into the realm of reality, while considering oneself to be an open-minded person,
it is like seeing the door, but having no intention of entering and passing beyond.”

Faith, then, has it’s place and function in a happy life. Not blind belief, the kind that makes people think the world was literally created by a bearded-sky-man 5000 years ago, but the same faith that allows you to water a seed, because you believe that it will sprout a plant.

This kind of faith is superbly important when we’re talking about spiritual development. Without it, it’s easy to get discouraged after a week of distracted meditation sessions that feel useless. It is imperative that we have faith and confidence that practicing will bear fruit.

This kind of faith is the antidote to doubt. It is the only thing that allowed me not to freeze or wet myself when doing this:

The Buddha distinguished doubt from skepticism, which he encouraged:

On the other hand, doubt is actually an obstacle. It’s the nagging thought cycle which tells you “this is useless, nothing will come of it” or the general feeling of “what’s the point?”. It is a subtle hindrance which at the same time makes you feel smart and proud of yourself for not being duped into some cult or some time-wasting activity.

That is exactly why it is so poisonous- it encourages the intellect at the expense of everything else, thus rewarding us for our narrow outlook.

The most powerful tool for dealing with the doubtful mind that I know is the Vajrayana visualization practice. Before I go any further I must be absolutely clear: I am not a Lama, and I only share what has been useful to me. These practices can be damaging, as indeed their point is to damage the ego and the rational mind’s fixations about reality. If you’re not sure you want to burst any bubbles, stop here and read something else.

A central part of the visualization practice is visualizing a deity. In some cases it is extremely elaborate, while in other cases it is rather simple. The training always progresses from visualizing the deity as external to yourself to visualizing yourself as the deity. This is because the deities are always supposed to help you realize that they are qualities of your very own Mind. So what are these deities- are they real or they just psychological tools? Well, this is where it gets interesting. They are, just like Schrödinger’s cat, both. Actually… it’s even more complicated than that. 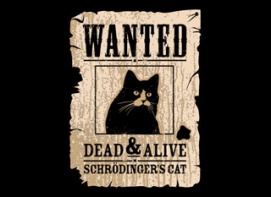 Nagarjuna, one of the most important and ingenious philosophers of Vajrayana Buddhism (and if you ask me, ever), set forth a model for avoiding any extremes, as suggested by the Buddha, since the Buddha advocated “A Middle Way, free from the extremes”. The model says the four intellectual-logical extremes to be avoided are as follows:

Both existence and non-existence

Neither existence nor non-existence

And that is the middle way that Nagarjuna offers us- between existence and non-existence. In order for the visualization to be most effective, we need to accept the deity as real, and the sameness of ourselves and the deity as real. But is this real? Yes and no, both and neither. This is what you gain by engaging in these exercises: your world can be as colorful and vivid as the world of Vajrayana Buddhism, your outlook as compassionate and wise as that of the most perfected Buddha, and all that is already available to you, if you allow yourself the benefit of uncertainty.

This is what Zen Master Seungsahn calls “Don’t Know Mind”. We are so uncertain all the time, since fundamentally we know that our view of reality is limited and incomplete. Our ego controls us through fear of uncertainty, fear of change, fear of death. But what if we allow the ground to be shaky? What if we allow ourselves to be exactly as superstitious as we are skeptical? What if you try and give up all that you know, if only for a brief moment, being like a complete beginner? I try to believe and disbelieve everything in equal proportions. If you try it, you might find that your world has come alive and that you are suddenly surrounded and immersed in real magic.

Here is a visualization practice that any beginner can do, provided by Lama Kathy Wesley. For more personalized practices, further information or any questions, get in touch.

0 comments on “Skeptics and Magicians”